For too many people, too often ? an adrenaline release hinders or even stops entirely their ability to perform as required to achieve a positive outcome. In fact, the freeze response when threatened is the most primordial self-preservation response we have. Though this response may have improved our chances of survival when faced with a threat, such as being hunted by a sabretooth tiger, a freeze response in modern times, more often than not, results in a greater likelihood of our being victimized.

It is because of our instinct to freeze first, that training to flee or fight becomes even more crucial. And ultimately, more difficult. Most self-defense instruction focuses on long term repetition to ensure that an optimal fight response is achieved. Though some training is better than no training, long-term high repetition doesn?t always result in an optimal response when threatened. We often train this way because, it appeals to our current cultural concepts of learning. However, at FAST Defense we believe that in order to survive in an asymmetrical world with asymmetrical threats, the best way to train is, asymmetrically.

Through an intricate and finely choreographed instructional process, students learn in very short order, via safe, and fun stress induced scenarios how to transition from a freeze response and into a fight response in a real-time, real-world threat. These scenarios become the motivational fuel that generates the energy, passion and commitment of the student to not only survive the confrontation, but to have control of themselves and the confrontation outcome.

Learning how to manage a stress induced adrenaline release and use it positively helps us to:

And most importantly, how to ensure that you?re personal OODA Loop is faster than a predators!

Science has shown that our brain does not harden. In fact, the human brain remains plastic throughout the course of our life. Though a young brain is more pliable in terms of new information molding, our capability to have neurocircuitry transformations does not end with age. In other words, you can teach old dog new tricks. 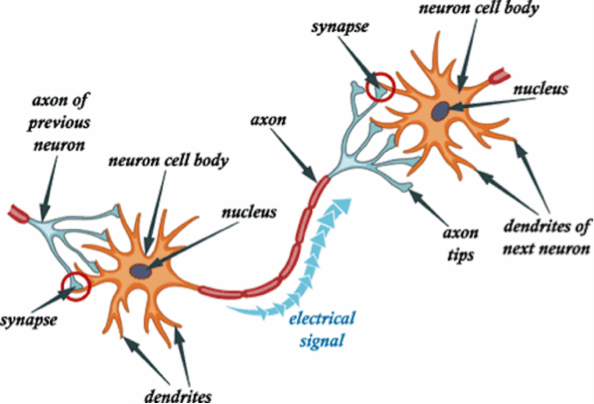 Signal Transfer (Neurons/Axons/Myelin): Neurons are the basic cellular building blocks of the brain. A neuron is made up of dendrites, which receives signals from other neurons; the cell body, which processes those signals; and the axon, a long cable that reaches out and interacts with other neurons’ dendrites. When different parts of the brain communicate and coordinate with each other, they send nerve impulses, which are electrical charges that travel down the axon from one neuron to the next neuron in the chain. This process repeats from neuron to neuron, until the nerve signals reach their destination. This is what allows us to respond to any given situation. Though these firings happen at incredibly fast speeds, the speed and strength, at which they do it, depends on the myelin that surrounds the axon and the diameter of the axon itself.

Myelin is the fatty (white) tissue, which runs along the outside of the axon (that interconnects our neurons). Myelin grouping on the length of an axon is called the myelin sheath. This sheath increases the speed and strength of the nerve impulses by insulating the electrical charge traveling through the axon. Myelination generation around axons happens naturally via new or reinforced neuro input process (experience, training, practice, etc.). And much of that generation happens during childhood. However, as we get older, we continue to generate more myelin onto our axons, though at a slower rate. Scientists believe that two non-neuron (or ?glial?) cells that exist in the brain play a role in creating new myelin. The first is a glial cell called an astrocyte. Astrocytes monitor neuron axons for activity, and lots of repeat signals, or stress induced signals, from a particular axon triggers the astrocyte to release chemicals that stimulate the second cell (known as an oligodendrocyte) to produce myelin, which wraps around the axon. Another strong point in favor of myelin?s performance-enhancing abilities is what happens when it’s missing. Demyelination is a known factor in multiple sclerosis and certain other neurodegenerative diseases which cause symptoms such as loss of dexterity, blurry vision, loss of bowel control, and general weakness and fatigue. This suggests that myelination is a critical factor in allowing us to make the most of our physiological functions.