Debunking the Myths of Self Defense – Do Not Fight Back

Part 2 of a series

?Don?t fight back or the attacker will become more enraged and hurt you worse.?

I am saddened and surprised that this myth is still being spread by various self defense instructors and other ?experts? in the field. Yet practically every month I hear new cases of people still being told this. Probably well meant but horribly misguided, this strong myth has led to many disastrous incidents.

Although Law Enforcement agencies have taken the ?don?t fight back? stance in the past, they have done a complete reversal of mindset. Current evidence is overwhelmingly in favor in most cases of fighting back. So why is this myth still so often prescribed?

My theory is that past inadequate training, poor socialization of women, and ?good ole boy? mentality historically conditioned women to play the consummate victim. With all this conditioning to fight against, women in general were typically not empowered to fight back. In fact to the contrary, women were taught to be ?nice? and ?not make a scene?. Thus there were most likely many incidents where women made half-hearted frail attempts to resist, which may have lead to greater severity in the attacks, causing law enforcement agencies to take the ?no fight? stance.

The difficulty increases when you add the statistic that approximately ? of assaults on women are committed by someone they know. It?s one thing to deal with an attack in a dark alley when it?s very clearly an assault. It?s a whole other thing when it?s someone the victim knows, maybe even likes, respects, or even loves. The role of ?caretaker? for which women are so famous and which we men are so grateful, further inhibits taking strong action in self-defense.

Then there is what I refer to as the ?good ole boy? network that is invested in preventing women from being strong and empowered. Although slowly changing, this network is still unfortunately very alive and well. From Law Enforcement agents to politicians, executives to teachers, this fear-based mentality continues to exist and proliferate the victimization of women. Recently I heard of a High school gym teacher who pointedly told female students to just ?relax? and ?take it? if attacked. His advice was that they should carry condoms to have their attacker ?cooperatively? wear while raping them. Incidentally, this golden pearl of wisdom was made in the presence of the boys in the class. So much for the education of our youth.

Traditional self-defense courses (often taught by good ole boys) failed to address the effects of the adrenal fear rush. Multitudes of courses instilled false security, infusing students with complicated moves and strategies. Good money was wasted on devices like mace and key chains and myriads of other survival wonder gadgets. Guns were purchased and tucked away for fear of ever having to actually use them. Firearms training was typically centered around shooting at static targets 50 feet away, in sterile non stress conditions. This same training has more cops being shot by their own guns that criminals managed to get control of and use against them more than not.

*The majority of police officers who are shot are done so with their own weapons. 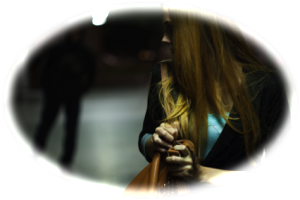 methods that we learned from our instructors. Much of this was useless in real situations. I personally struggled with this for years, training in classic Martial Arts while at night I would experience real fights where my Martial skills helped very little. Yet to be fair we had no other paradigm to work from until the fairly recent advent of Adrenal Stress Response Training.

Yet even against all these odds, fighting back was often successful. The vast majority of attackers are frightened dis-empowered individuals looking for a sense of control or power in their lives. They prey on the weak and frail and do not want or expect a fight. When the alleged ?victim? does not respond accordingly, most assailants will back off. Now with the technology of adrenal stress training, such success stories abound.

Are there times when a victim should choose not to fight back? Not many but sometimes Yes. When the alleged victim feels that they have a better chance of surviving if they acquiesce than if they do not. These cases are rare. Such a case may be an armed gang attack where the odds of successful defense are almost impossible. Or perhaps to save a child or another loved one. But the operative word is that the person should ?choose? to submit, or ?choose? to fight back.

No matter what the end result, Adrenal Stress Response Training arms a person with many new choices and the power to act on those choices. And even if they choose to cooperate, their mental and emotional states are better than if they were simply victims. For when someone chooses either to submit or to resist, they are operating from a place of power.